A teenager from Hampshire who trains on a home-made wooden horse came a step closer to becoming a jockey by riding her first winner at Cheltenham Racecourse on only her fourth race.  Competing at a Pony Club race day, the win was all the more remarkable as thirteen-year-old Olivia Tubb from Chandlers Ford has never owned a pony.

Olivia has been able to take part in racing through an innovative training scheme run and funded by the Pony Racing Authority (PRA), as chief executive Clarissa Daly explained:  “We know there are children who have the talent to become jockeys, but need a helping hand to access the opportunities. Our 12-week youth training scheme, funded by the industry, is designed for children who cannot take part in pony racing because of financial or other circumstances. The scheme aims to get the children fit, skilled and ready to take part in a proper pony race. With Olivia having completed the scheme in 2015, and raced three times that year, it was clear that she has the commitment and ability to take her training further.”

As part of the PRA’s graduate scheme, Olivia has been travelling from her home in Hampshire to Banbury in north Oxfordshire every month for training with Julie and Patrick Scott at Apple Tree Stud, a Pony Club Centre.

According to Olivia, riding the Scotts’ pony Mouse to win at Cheltenham was a dream come true: “Mouse was so brave, he really tried. I knew that if I kept pushing he would keep going all the way to the line. Ruby Walsh is my favourite jockey and to win at Cheltenham where he has had so much success is a dream come true, I still can’t quite believe it actually happened!”

Olivia has the enthusiastic support of her family as her father Paul explained: “Because Olivia doesn’t have her own pony to practise on, I decided to design and build her one – quite a challenge for someone who has no carpentry skills! Olivia’s fitness training and work on her riding technique takes place on a wooden horse, named Troy after the legend of the Trojan horse – and also the 1979 Derby winner! Olivia and Troy have climbed the Cheltenham hill and passed the winning post in front of their rivals countless times over the past eighteen months but never dared imagine the dream would turn to reality!”

Praising the training scheme, he said: “Julie and Patrick Scott have been absolutely fantastic, encouraging all the young jockeys and sharing their knowledge with enormous enthusiasm. We’ve clocked up some miles making the two hour drive each way but it’s been absolutely worth it to see Olivia riding so well.”

Clarissa said: “It’s through the generous sponsorship of broadcast services company RaceTech that we’re able to offer these monthly gallops sessions and a chance for our YTS jockeys to race again. We want to keep the enthusiasm and desire going in these riders who have the talent to succeed, and give them a leg up into the horseracing industry.”

For now Olivia is back to riding Troy but hopes to ride in more pony races in the future. Her father Paul said: “Olivia’s only thirteen at the moment but would like to be a jockey when she’s older. She knows she’ll need a bit of luck and for doors to open to achieve her goal, but with Olivia’s levels of dedication and determination she’ll be well placed to grab any opportunity with both hands!” 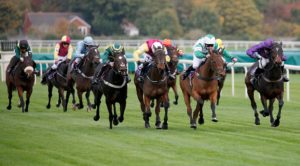 Become a PRA member and experience the thrill of pony racing.

Find out all about The Racecourse Series