These Regulations which are correct at the time of going to print and may be subject to change by announcement on www.ponyracingauthority. co.uk, relate to any Pony Racing Authority recognised Pony Races with differences in Regulation colour coded.

Changes to Regulations for the current season appear in bold. Regulations that have been deleted no longer appear. Changes to definitions have not been highlighted.

In all instances the initials PRA refer to the Pony Racing Authority and the Stewards and Officials who have been appointed and publicised for each event by the host organisation. All such individuals are permitted to ensure these Regulations are complied with and have absolute authority from the PRA to act accordingly to ensure compliance and Regulation. 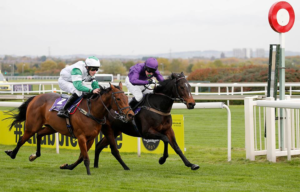 Find training days that are coming up.

Join the PRA today and experience the buzz of racing

Are you already qualified to race?